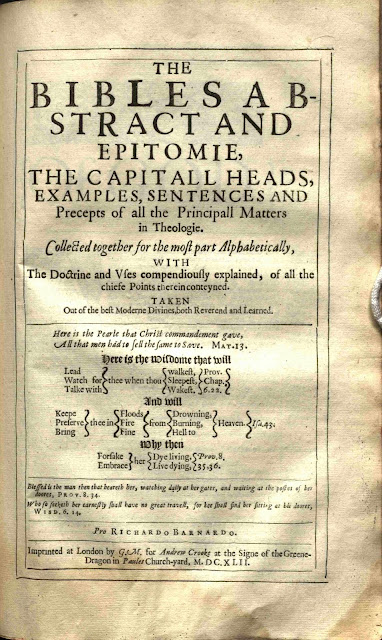 Bernard, Richard. Thesaurus Biblicus, Seu Promptuarium Sacrum: Whereunto are Added all the Marginall Readings, with the Words of the Text, and Many Words in the Text Expounded by the Text, all Alphabetically Set Downe Throughout the Bible: In the End is Annexed an Abstract of the Principal Mattters [Sic] in the Holy Scripture. London: Imprinted by Felix Kingston, and are to be sold at his house in Pater-Noster-Row, at the Signe of the Gilded Cock, 1644.

This is a strange beast, defying easy generic categorization.  It certainly is not a concordance, as Bernard himself makes clear in his preface to the reader (for a proper concordance, he refers to the reader to either Cotton's or Newman's: these seem to be the standards ones).  And yet it looks a lot like other concordances of the period (and the DNB entry on Bernard calls it a concordance).

And the Thesaurus and the Concordance share a similar indexical function: identifying common content and pointing to various locations where it and be found.  The main difference between the Thesaurus and a concordance is that a concordance correlates content words with their various occurrences in the Bible (as in Cotton and Newman), whereas the Thesaurus organizes its material according to subject words, which includes both occurrences of the word itself in the biblical text and instances where the text exemplifies the subject. For example, under “Abase” Bernard includes verses that use the word (all of the one that Cotton's Concordance includes) and also verses that exemplify the idea without naming it. Bernard is also more selective in his headwords, including only words that he deems topically important. He also provides paraphrases of the subject term, along with instances of what appear to be Latin cognates.

The title, calling it a holy storehouse, places this book in the tradition of aids to rhetorical invention (such as Cawdrey's Rich Storehouse of Similes): there is even, under the section heading "Simile," a section of similes arranged under alphabetical heads from A-Z. Editor John Conant, in his preface to the volume, picks up on this rhetorical function in his historical contextualization of the Thesaurus: "Chrysostome likens the holy scripture, to a treasury, to a fountaine, to an Apothecaries shop: Irome, to a table richly furnished with variety of delicates: Ephrem, to an armorie: Basil, to a looking glasse: Chrysostom againe, to a pleasant garden; and Cassian, to a fruitfull field" (sig. A3). Many of these metaphors were used in the Renaissance in discussions of poetics and rhetoric. For both Canant and Bernard, the Thesaurus is all about enabling the reader in the Biblical environment (A3-[A3v]). Much of Bernard's preface consists of instruction of the reader in how s/he can make use of the Thesaurus.


A postscript on marginalia:
An interesting notion of the "marginal" as expressed in “The Diverse Marginall Readings with the Text.” It is interesting in that Bernard seems not to be referring to a physical margin. That is, he is not collecting readings found in marginalia. While the entry under "Accept thy sacrifice" does paraphrase a marginal gloss in the KJV for Psalm 20.3, in the case of “Abase” it does not. What he does provide for “Abase” is a paraphrase—“bring low”--, which is the kind of thing one might expect in a marginal gloss for Job 40.11. So, marginal now has a kind of metaphorical meaning: a gloss is a string of text that is removed from the object of focus, the centre of view, but related to it, and it is the kind of material one might very well relegate to the physical margin of a book. That said, there doesn't seem to be a whole lot of difference between the kind of material (and its rationale) provided in the “The Diverse Marginall Readings with the Text” and that provided in the Thesaurus.
Posted by Brent Nelson at 12:20